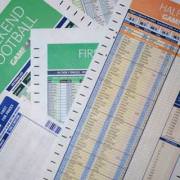 There is Champions League and Football League action tomorrow night and we have a free accumulator betting tip.

Bet365 are a great bookie to join today with a £200 free bet for new members.

Atletico go in to the second leg of this tie with a one goal advantage and will be determined to go through. Their form has faltered a bit of late but they are still very strong at home losing just once in all competitions this season. They take on an AC side with just two wins in their last seven and the same amount of wins in their last seven away from home. Atletico Madrid’s lead in the tie is slim but they should see it through on Tuesday.

The other Champions League tie sees Arsenal try and overcome a two goal deficit, and things don’t look good. Bayern have won their last thirteen competitive home matches now and scored six at the weekend. Arsenal are without a win in three away from home. Bayern should have too much once again for Arsenal and make it through to the next round.

Rotherham are currently on a ten game unbeaten run in League One and will be look to extend it as they travel to Oldham. They are unbeaten in five on the road and have lost just once in eleven away. Oldham find themselves just three points clear of the drop and have won just one of their last six league matches. They have picked up just one win in five at home and against a Rotherham side right in and amongst the Play-Offs, an away win looks on the cards.

Finally, we go to a mid-table battle in League 2 as Bristol Rovers take on Dagenham and 14th take on 15th. There is a stark difference in form though as Rovers find themselves on a six game unbeaten run while Dagenham are without a win in five. Bristol Rovers have won their last three at home Dagenham have picked up just one win in ten away from home. A dull mid-table clash in League 2 but one that home advantage should decide it.

4. Bet365 will automatically double that deposit for you

Bet on tonight's both teams to score tip at Bet365.