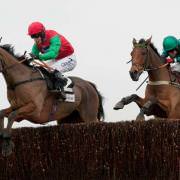 This year’s Arkle Novices’ Chase looks set to be a great renewal.  This 2m Grade 1 has been won by some superb horses in the past including Tidal Bay, Sizing Europe and Captain Chris. The last two runnings have gone to Nicky Henderson and Barry Geraghty, with Sprinter Sacre and Simonsig winning at short prices.  Here are my thoughts and Arkle Chase best bet.

This year Henderson is represented by the former International Hurdle winner – Grandouet (10/1 Betfred).  A hat-trick for the champion trainer looks highly unlikely this year as, since going over the larger obstacles, the horse has failed to live up to his potential.  After unseating Barry Geraghty first time out whilst struggling to get to grips with Paul Nicholl’s Hinterland, he was beaten once again by Hinterland and followed that up with a trouncing by Dodging Bullets.  He will have to improve no end to figure here.

Unlike Grandouet, DODGING BULLETS (6/1 Stan James) has been very impressive since sent chasing.  He was a very decent hurdler (4th in the 2012 Triumph Hurdle and 3rd in the 2012 Christmas Hurdle).  He picked up an easy win on his debut over fences in October before going on to win two Grade 2 races accounting for the aforementioned runner and the useful Raya Star.  His most recent start was his most impressive as he ran outside novice company for the first time.  Despite giving the giving Haldon Gold Cup runner up, Module, 3lbs he battled to finish runner-up by a neck.  That performance was extremely impressive and that will have given him a lot of confidence.  Another noteworthy point is that Dodging Bullets has Cheltenham form, winning here three times including once this season.  The drying ground will be another positive and everything looks in place for a big effort.

Two time Cheltenham Festival winner Champagne Fever (3/1 BetVictor) will likely go off a short priced favourite and with his impressive course form he’s difficult to ignore.  However, his campaign this season has been less than exemplary. The 2013 Supreme Novice winner has only had two runs over fences, the first of which was at Punchestown and was an easy victory.  His second start on the other hand in the Racing Post Novice Chase was less impressive.  He seems best suited when allowed to dictate matters and unable to do so at Leopardstown was his undoing.  His two runs have been followed up by a strong piece of work, again at Leopardstown, so the positive vibes are certainly noteworthy.

Rock On Ruby (5/1 Coral) is trained by Harry Fry and on official ratings was clearly the best hurdler in the field.  He won the Champion Hurdle in 2012 and finished second in 2013.  He’s won twice over fences since the switch, with his latest run coming over a Grand Annual fancy Mr Mole.  The drying ground is a huge positive with his trainer, Harry Fry, desperate to get him out on good ground.  Despite conditions to suit, at the current prices he isn’t worthy of a bet.  In two runs, he’s only beat three horses and comes into the race considerably underprepared.  His inexperience may be costly as he is yet to face opposition of this quality.

On horse that does have a strong chance is Trifolium (9/2 bet365).  He already has Cheltenham form, finishing third in the Supreme in 2011 behind Cinders and Ashes and Darlan.  He has solid form in Ireland, cruising on his chase debut, followed by runner up spots to very good horses in Felix Younger and Defy Logic.  He reversed the form with the aforementioned pair impressively on his latest start.  He will handle conditions well and looks to have a lot in his favour.

I’m not convinced about Alan King’s Valdez (10/1 Stan James).  Although he has won three times this season, he has faced poor quality opposition throughout his campaign. Undoubtedly this is a step up in class and I think the pace of the race wont suit him either.  He may very well lack the tactical speed to keep up with the pace.

Place a bet on William Hill on your mobile and if your horse finishes second get your money back as a free bet!

Solid form is a must to succeed in the Arkle.  In the last two renewals, both Sprinter Sacre and Simonsig went through their novice campaign unbeaten before tasting success in this race.  Although DODGING BULLETS finished second last time out, he only lost by a neck whilst having to give weight away.  His form looks to be the strongest and his experience outside of novice company could well make all the difference.

Open a new William Hill account today only and bet £25 to get a free £50 bet: