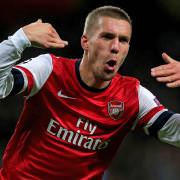 Leave those Sunday lunch dishes in the sink till later, as the late afternoon kick of sees Arsenal host Crystal Palace at The Emirates and we have some free betting tips for you.

After slipping up against Southampton, The Gunners were done no favours by their North London rivals as Manchester City leapt above them to the top of the table. However with either them and/or Chelsea set to drop points on Monday, a win against a resurgent Crystal Palace side is a must. Despite sounding like a home banker, this is likely to be a decent test of Arsene Wenger's men. Tony Pulis has turned Palace into a solid unit at the back and they have proved a real tough nut to crack in recent weeks. On average they concede their first goal of the match in the 37th minute, this is the third best ratio in the division. Although The Eagles have lost a lot of games so far this season, they don't tend to get spanked by their opposition too often either. Narrow loses by just a single goal at The Etihad and Stamford Bridge, combined with the marked improvement under Pulis hint towards a frustrating afternoon for Arsenal on Sunday.

Nevertheless, there is a flip side to that coin, Crystal Palace are the lowest scorers in the Premier League with a paltry 15 strikes, so even if they do keep their hosts out for long periods it's extremely unlikely they will outscore them. With this in mind, back Arsenal to win by two clear goals at 17/10 with William Hill and draw/Arsenal at 3/1 with Betfred.

With an early goal likely to throw a huge spanner in the works with the previous bets, it's important to cover yourself somewhat with another angle, Betfred's 'Double Delight, Hat-trick Heaven' offer is a good opportunity to do this. I'm sure you are all familiar with the concept as we've been having to tolerate those appalling adverts for sometime now. Back Olivier Giroud at 9/4, he is The Gunners' top scorer and has scored the first goal on six occasions already this season. Although there is better value elsewhere, if he bags a strike early doors you have the whole game for those odds to grow. Finally, for a little bit more of a punt, old boy Marouane Chamakh returns to the scene of the crime. Back him to score in an Arsenal win at 14/1 with William Hill, stranger things have happened.

Open a new account with William Hill today for a free £25 bet! Simply place a bet of up to £25 and get it matched win or lose!